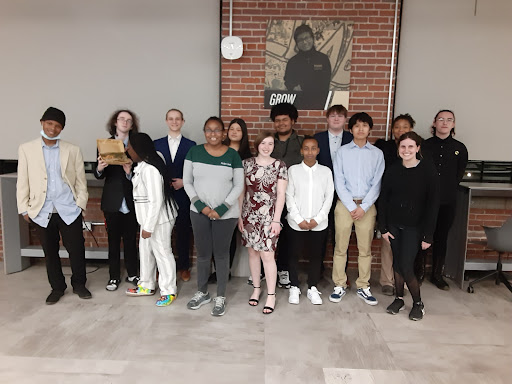 On November 9th, 2020 the PPHS mock trial team had its first official class meeting. For 55 minutes the class got to know each other, got to know Coach Howells, and read their case files for the first time. The 2021-2022 Indiana mock trial competition was based on a civil case where plaintiff Jordan Patel is suing Cameron Miller for furnishing alcohol at a party.

For the first 6 weeks of their time together the team learned the foundation of a mock trial and their roles as lawyers. They learned how to write openings, closings, directs and crosses. Each individual picked a defense or plaintiff role and practiced it the best they could.

For their second cycle together they mastered the art of objections with the help of Taylor Fontan, an associate attorney at Lewis Wagner, LLP where her practice includes representing businesses, government entities, etc. After having a good foundation and understanding of their roles groups were formed. Discussions and debates were started and after a few changed minds, a plaintiff and defense team was formed and ready to tackle regionals. The defense, which defended Cameron Miller, consisted of Raina Maiga, Maddison Tegeler, Ryan Evans as attorneys, along with Leslie Olivares Vidal, Alton Hawver, and Wesley Lance as witnesses. The plaintiffs, which defended Jordan Patel, consisted of Lonzell Mobley (Blu), Jeremiah Sweeny, and Daisha Lasley as attorneys along with Wesley Lance, Alan Medina, and Jayven Burris as witnesses.

The last cycle before their first competition was a joyful and stressful ride. The team came together after school hours and on non-school days for more practice. Attires were decided and virtual meetings took place but eventually, the team was ready and optimistic. February 19th was the day of the competition, the teams arrived early and had their breakfast before the first competition at 9 a.m. The defense team went first against Carmel high school then the plaintiffs competed against Herron high school. Came the last competition of the day The PPHS defensive team went against Fishers high school for a long and challenging competition to end their regionals

Then came the waiting for 2 weeks the team waited to find out whether they qualified for the state competition. In preparation, the team continued to master their craft.

Unfortunately, the team was not one of the teams who auto qualified for state but they still had hopes because around the corner came the wild card teams which would also advance to state. Again came the waiting and the additional practice but on March 2nd during the Bar foundation award ceremony, the PPHS mock trial team was, sadly, not picked as a wild card team. Even with the disappointing news, the team remained proud of their work and performances. They still had some optimism because their scoring sheets were still to come.

After a week of waiting each individual got to see their scores from 3 individual judges which led to some discussions on what could be improved in their performances. During one of the reflection periods, Coach Howells announced the shocking news that due to some schools not being able to participate the PPHS mock trial team had been chosen to participate in the Indiana mock-trial state competition as a wild card team. This news was what they had been hoping for but that joyful feeling came down once they realized that most of the participants could not attend considering the other plans they had made. With a few stares and discussions and the help of Coach Howells, the team decided to take on a new mock trial case  “The people of the state of Michigan VS Dannie D. McGrew” which they will be using to compete against each other on April 7th at the city council building.